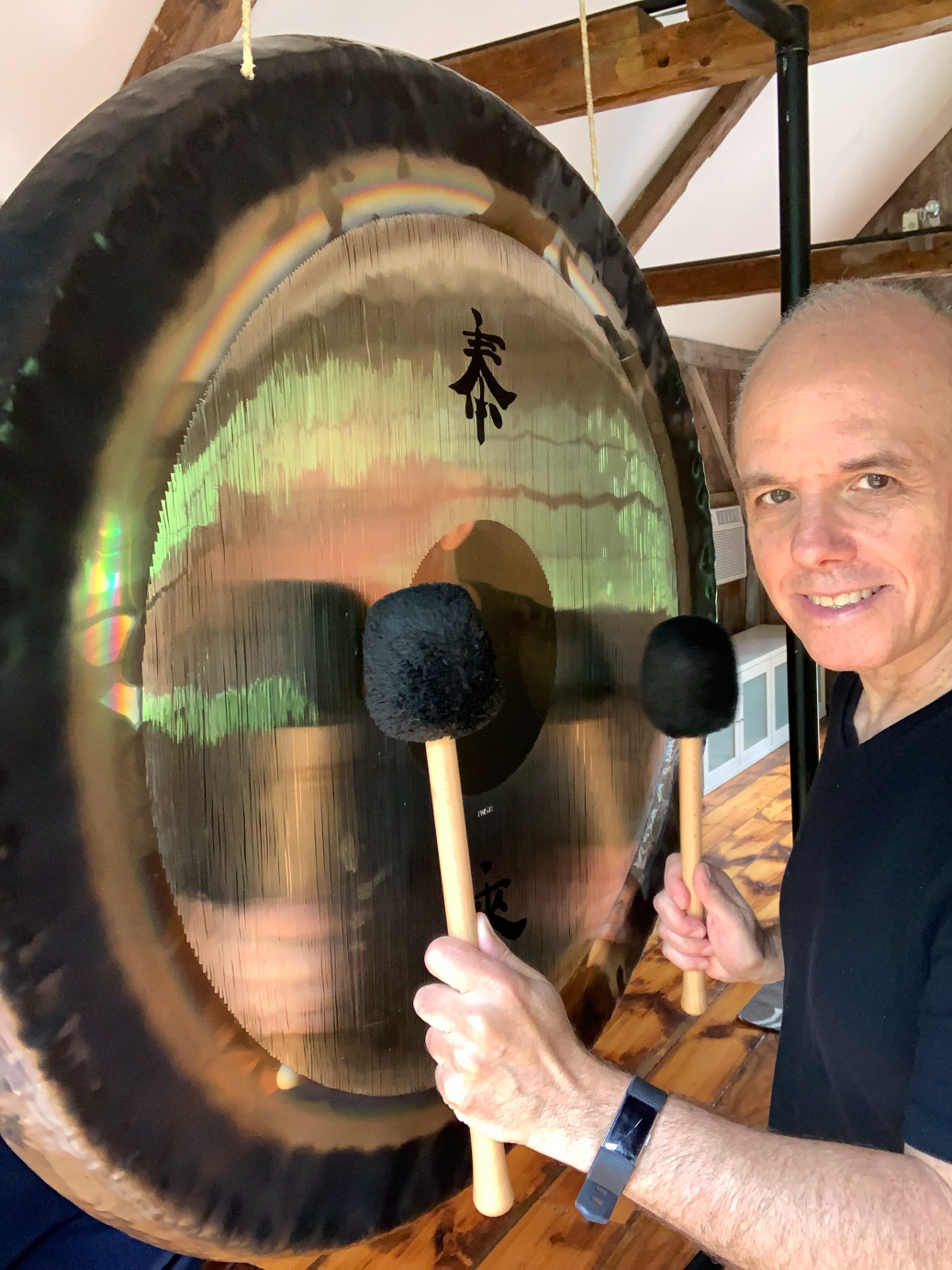 September is Alzheimer’s Awareness month and aims to raise awareness and challenge the stigma surrounding the disease. Lots of research has been undertaken about how sound and music can help to relieve behavioural and emotional symptoms of Alzheimer’s Disease.

British neurologist Oliver Sacks states that music is processed more widely in the brain than any other activity that we do. This could be one of the many reasons why people who suffer from Alzheimer’s often remember music from their youth or have the ability to retrain the ability to play an instrument they had previously learned.

Six years ago, Ted was diagnosed with Alzheimer’s Disease and just over one year ago he stopped talking. He had become almost completely non-verbal. He also stopped making eye contact when you were speaking with him.

I decided that a BAST Method Sound Bath (Sound Bath with relaxation protocol – Himalayan bowls to gongs to crystal bowls to therapeutic percussion to silence) should be the first treatment – non-invasive, soothing. I did think/hope that the gongs would stir things up.

To my surprise, Ted stayed awake for the full 50 minute Sound Bath. I could see his eyes following me playing the instruments. To me this meant he was actively listening. By the way he reacted to each new donging of the bowls, rolling waves of the gongs, singing tones of the Crystal bowls, and sounds of the percussion, it felt like Ted was interested and engaged. And that his hearing was intact. An important fact, as hearing loss/impairment seems to be associated with Alzheimer’s. Researchers don’t seem to be sure which comes first; struggles with the disease or hearing loss.

While our bodies are always listening, we are not always actively listening.  I thought maybe this is the first step in Ted healing. I wondered, “could he become an active listener.” Can people challenged with dementia or Alzheimer’s Disease become active listeners? And if so, would that mean they have relearned an older behavior? And if so, maybe other behaviors could be restored? According to the Website “Skillsyouneed,” active listening can be defined as:

“…fully concentrating on what is being said rather than just passively ‘hearing’ the message of the speaker. Active listening involves listening with all senses…” Getting Ted to actively listen was going to be my first goal for him, in our work together.

Ted watched me pack up my stuff; another good sign. His wife said that he seemed happier and calmer. He was smiling. I asked him if he enjoyed the Sound Bath and he answered with a “gibberish kind of vocalization.” Another good sign, he seemed to be trying to communicate. Of course, we couldn’t know for sure, but I felt the Sound Bath was a new beginning for him. Things were going to open up.

I decided to do some research into what Sound Therapists and Music Therapists had recently tried with Alzheimer’s sufferers. When I came upon the “Personal Playlist,” I thought that was perfect. It is a technique I tried with my mother who struggled with Alzheimer’s Disease 17 years ago. Trying to find musical ways to help her was what started me on my journey into Sound Therapy.

A Person Playlist is a collection of songs that evoke some kind of emotional or physical reaction. You can create it on Spotify, Apple Music or simply download MP3’s. You could use YouTube, but I think all the adverts would be distracting.

I researched all the top 100 hits, in all genres, for the formative years of Ted’s life – between 10 – 25 years old. I then opened Spotify on my iPad and put a set of headphones on him, his wife and I had a set of headphones as well, and then we listened.  And listened.

Each time Ted showed any reaction we put the songs into “Ted’s Favs.” By the end of our session we had about 30 songs that Ted “seemed” to really enjoy. I told his wife that each day she could play about 1 hour of the playlist to Ted and take notes on which songs he seemed to really react to. I told her that in each of my sessions with him, we would refine the playlist and, hopefully, find 30 mins worth of music that he always had some reaction to.

His first reactions to the music were many – he laughed, he made a face of “puzzlement” that has continued, he vocalized, and sometimes he tried to sing. If he didn’t have one of these reactions, the songs were moved off the list.  If he had a “super big” reaction the songs were given a heart. We were on our way. This was working. Things were moving and changing in Ted.

After a few weeks of trying different Sound Therapy Methods/Instruments, I settled on what was going to be our weekly treatment. I decided to incorporate the new research being done at MIT with Alzheimer’s and Gamma Waves. Specifically using a 40 HZ tone. In experiments with mice, the researchers found that playing a 40 Hz tone for the mice significantly reduced the brain plaques associated with Alzheimer’s. I thought lets try it.

We start our sessions with 20 minutes of listening to the 40 Hz tone ( as a binaural tone) through headphones.

We then move to 25 Minutes of tuning fork therapy – 5 minutes of the Otto 128 weighted tuning fork placed on different acupressure points.

Then 20 minutes of a Nervous System Balancing protocol using Solar Harmonic Spectrum Tuning Forks. This is a protocol I learned in my studies Dr. John Beaulieu, a pioneer in the world of Sound Therapy. This protocol uses the intervals of the 5th. I use a C – 256 HZ tuning fork and a G – 384 Hz tuning fork. I tap them and place one near each of Ted’s ears. When the vibration stops, I retap them and alternate their positions. So each ear is hearing the C, then the G, then the C and so on. Ted really enjoys the sound of this. In fact, so much so that when I asked him if he liked the sound of the tuning forks ( I try to ask several different “yes or no” questions during the sessions, to see if I might get a quick response), he gave me an emphatic, “YES!”

Then Ted and I do some drum work together. I utilize a 16’ Remo Bahia Bass buffalo drum and a regular 16’ Remo frame drum. When I initially started using the drums, Ted would just sit there and watch. Now he grabs a stick and tries to copy what I do. I base the sessions on the “Rhythm of Life” protocols from the British Academy of Sound Therapy. Ted always laughs and is “verbal” during the drum section of the treatment. This past week I showed him how I hold the drum from behind with the ropes and he made an effort to copy me. This was very encouraging. The drum work usually lasts 10-15 minutes depending on Ted’s interest. He especially likes when I play the bass drum over his head. These drums have really strong vibrations. Playing the drum over his head is like giving him a head massage.

The final part of each session is going through Ted’s “Playlist,” with him. I have created several different playlists on Spotify of songs Ted has “reacted’ to. We try to keep only songs he strongly reacts to in his “Ted’s Fav” playlist.

Some observations from the sessions so far:

“Does that sound make you feel calm?”

After the drum session –

While I know this may not seem like much progress, this person was completely non responsive, 3 months prior.

In the last session he asked me a question.

Ted now vocalizes through the whole session. He laughs.

He tries to talk and sing. It really feels like each week we are moving forward; sometimes big jumps and sometimes baby steps. So far there have been no (knock on wood) backward steps. I will keep you posted.”

It is so great to hear how our past students have gone on to help Alzheimer’s patients through sound therapy. If you have previously trained with BAST and have an experience to share, please email us – [email protected] .